The FRJA Board of Directors 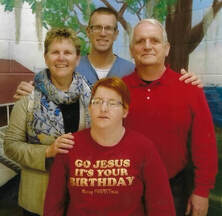 Michael McBride is a Senior Database Administrator with Montalbano and Associates, currently contracted with the Florida Department of Transportation in Tallahassee. In March of 2010, his life drastically changed when his 19 year old son, Conor, took the life of his fiancé, Ann Grosmaire. Abruptly immersed in the judicial system, Michael witnessed firsthand the benefits of Restorative Justice in his son’s case.

As the story of this tragedy gained exposure, Michael has provided a unique perspective as a parent of the offender. With his wife, Julie, and Ann’s parents, Kate and Andy, he participated on a Restorative Justice panel at Campbell Law School and regularly speaks to a Law and Society class at Florida State University. He has presented at Restorative Justice conferences and contributes his knowledge of Restorative Justice to the Leadership Tallahassee Justice Day programs. Michael takes every opportunity to provide his perspective in support of restorative practices.
Andrew Robbins
​Board Vice President 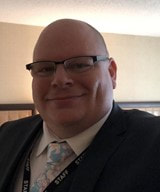 Andrew is the Chief Executive Officer for IVSITITA Limited, a secure system specialist. He co-founded the company in 2013 and became the CEO in 2015. focused on developing and coordinating the company’s efforts to bring a secure management and referral system in conjunction with creating a standardised quantitative and qualitative reporting mechanism to a global audience.

​In 2019 he was appointed by The Lord Chief Justice to be a Magistrate in England and Wales, serving for the Adult Criminal Bench in Cornwall. Since being appointed his expertise in Information Technology and background in volunteer sector has been recognised as has since seen him appointed Regional Digital Lead For South West England.
Michael Humphreys
Board Secretary 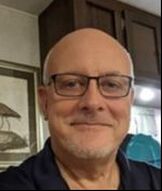 ​Currently tenured Associate Professor of Ethics in his 15th year at Bethune-Cookman University, Dr. Michael Llewellyn Humphreys holds with distinction the Ph.D. in social ethics from Drew University in Madison, NJ, the Masters of Philosophy and Masters of Divinity degrees, also from Drew University, and a Bachelors of Science in Physical Science from the U.S. Coast Guard Academy. His primary academic interests include restorative justice and ecological sustainability. Prior to his work in higher education, he completed commissioned service in the U. S. Coast Guard.

Gretchen provides facilitation and training on utilizing and incorporating restorative justice approaches in criminal cases involving serious crime. For over 34 years Gretchen has been an advocate and counselor for victims of crime in Gainesville, FL. From 1999-2012, She was also the Director of Project Payback, a juvenile offender restitution program housed in the State Attorney's Office-8th Judicial Circuit. Gretchen is also the creator of amendinitiative.org and the facebook platform page Unshame which posts supportive messages for survivors of  sexual assault.  She believes that our lives are defined by what we are paying attention to; that people and ideals are often in conflict, and that in order to repair harm we need to face and understand harm. She has studied Morita therapy and trained with Dr. Brian Ogawa for the past 24 years. On weekends she is an avid gardener, horseback rider, and story collector.  Here is a link to Gretchen's recent TEDxUF talk, Restorative Justice: Repairing the Harm after Sexual Assault'​
Gretchen is the past Board President of FRJA.
Nancy Charles
​Board Member 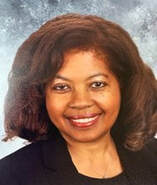 ​Nancy began her career as an educator for over 25 years teaching French at the University of Hawaii and English in Japan.  She has spent the last 20 years in Orange County Public Schools in Orlando, Florida as a Reading Teacher (k-12), District Instructional Coach, and School Administrator.  As a district coach, Nancy launched the implementation of Restorative Practices (RP), in her school district and presented in several conferences on RP in schools.  She was also a consultant and trainer for other school districts including Miami Dade and Broward County. Nancy believes in the benefits and power of restorative practices and is committed to expanding the practices in schools and communities. ​
Edith Giorgi
​Board Member 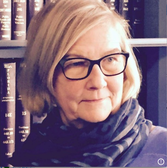 Ms. Georgi served as an Assistant Public Defender for the Dade County Public Defender from 1981- 2016 where she founded the Capital Litigation Unit which she led until her retirement in 2016.

She has tried over seventy-five cases to jury, including 37 homicides of which 9 have been capital.

Throughout her Public Defender service she regularly trained lawyers both in the office as well as in the community.  Currently Ms. Georgi is a Senior Fellow in the Historic Black Church Program at University of Miami Law School’s Center for Ethics and Public Service.
Dejah Myers
​Board Member 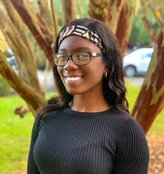 ​Dejah Myers is a life-long social justice advocate who is passionate about harm reduction and social revolution. She is a public speaker specializing in topics regarding race, gender, mental and physical health, and environmentalism, and has spoken for organizations around the world in countries like Mexico and South Africa. For the past 4 years, Dejah has worn many hats while working with the PeaceJam Foundation – an international organization founded by Nobel Peace Laureates for the purpose of inspiring youth to better themselves and their communities – including mentor, conflict resolution leader, and mentor trainer. Additionally, Dejah served as an adjunct professor at Thomas University, teaching their Peace Leadership course.
Dejah has also received both a Bachelors and Masters from Florida State University in the field of Sport Management and is currently pursuing a second Masters in Clinical Social Work with the hopes of continuing to work within the field of criminal justice reform and advocating for the importance of mental health.
Ryan Lyttle
​Board Member

Ryan Lyttle will be an eight-year veteran with the Miramar Police Department.  Ryan has served on Patrol with the Community Oriented Policing Bureau, in the schools as a School Resource Officer and is currently assigned to the Community Resource Unit. Ryan serves as an active member of the Multi-Agency Homeless Task Force of Broward County, the South Florida Community Policing Association, the Justice Project of South Florida
During his tenure as a Police Officer Ryan has received many accolades; some of which include Officer of the Quarter, Officer of the Year, two Life Saving Award, Broward County’s Elinor Adler’s Pat on the Back Award, and the Broward County PTA/PTSA Award of Merit and was the 2016 runner up for the ASIS International Community Policing Officer Award.
One of Ryan’s proudest moments as an Officer was when he investigated, arrested, and helped secure a guilty conviction for two Human Trafficking offenders. In doing this, he directly saved one juvenile female from being sex trafficked and approximately nine others indirectly.
Some of Ryan’s community involvements include participating in the International Association of Chief of Police Conference in Philadelphia, presenter at the Preventing Crimes in the Black Community Conference in Tampa, FL, aided with the Justice Project’s: Breaking Barriers initiative for the Urban League of Broward County, was the Keynote Speaker at the Lights On Girls Conference in Broward County and served Evangel Church International as a youth instructor for over 13 years. Ryan is also a proud member of Alpha Phi Alpha Fraternity Incorporated where he has engaged the community through numerous community service projects.
Ryan is a graduate of Florida International University where he earned his Bachelor’s Degree in Criminal Justice. The son of hardworking, immigrant Jamaican parents, Ryan’s philosophy on life is simply this: “Always strive for greatness!” ​
Wanda Easley Perkins
​Board Member 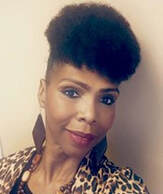 Wanda Easley Perkins is a native of Pensacola, Florida and is a retired educator of 35 years in Escambia and Orange Counties. She holds a Bachelor of Science Degree in Art Education and a Masters Degree in Educational Leadership and is a member of Alpha Kappa Alpha Sorority, Inc.
Wanda was employed as an art instructor for 17 years and as an Administrative Dean for 18 years. She served as the school coordinator for restorative practices and facilitated restorative circles with students, parents, and school staff. Wanda also served as the school coordinator for anti-bullying programs such as Challenge Day, Soul Shoppe, Holocaust, and Unity Day.
Wanda is a passionate advocate of restorative practices and has been a member of FRJA for four years. 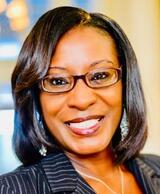 Tolliny Rankins, Th.D. is an Author and Instructor in the field of Personal Enrichment and Criminal Justice Reform. For 25 years she was an entrepreneur with a successful direct sales career. She earned her Doctorate in Christian Theology from International Miracles Institute in Pensacola Florida. She has a Masters degree in Christian Theology. She is the published author of 28 Ways To A Better You, Let’s Pick A Fish, I’m Amazing and Co-author of 28 Pitfalls Of A Man. As an Adjunct Professor Tolliny Rankins has taught her original courses at Northwest Florida State College along with leading Personal enrichment lectures and Diversity workshops. Her materials have been taught at the Florida Department of Juvenile Justice as well as in the Re-entry Department in Correctional Institutions in Florida and Tennessee. She is dedicated to actively serving with those involved in criminal justice & prison reform as she shares her experience of the effects of having an incarcerated loved one. She is the Co-founder of Redemption 100; a non-profit organization committed to Criminal Justice Reform, assisting those being released from incarceration with essential materials to effectively navigate back into society.

Along with serving as our Executive Co-Director, Dan teaches empathy skills to teenagers and supports them to achieve their goals with the Community Connections Restorative Justice Program in Tallahassee,
Dan received his AB from Amherst College, and his JD from Lewis and Clark College's Northwestern School of Law.
He is the seventh of eight siblings, and uncle of many.  He lives in Tallahassee, where he loves to swim, bike, play, cook, eat, and watch stuff grow.
​JoHanna "J" Thompson
Executive Co-Director

​JoHanna Thompson, MPA is an Executive Management Consultant who earned a Master of Public Administration from New York University, Wagner School of Public Service, and an undergraduate degree in psychology from Columbia University.
J’s career has been dedicated to creating collaborative spaces across an intersection of networks, fostering relationships, and maintaining a vision to increase the capacity of influencers, community organizations, programs and campaigns working toward equitable social and transformational justice.
J Thompson lends lived experience and expertise as a Social Impact Strategist, Public
Administrator, Organizer, Guardian ad Litem, Therapeutic Foster Parent, Temporary Instructor,
Interventionist, Restorative Justice Practitioner, facilitator, trainer, and Healer. A self proclaimed
agent of change and persuasion, J’s personal commitment and approach to life aligns with
community accountability, Structural Reconstruction, and the belief that “one day change gonna come.” 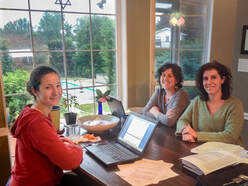 ​Around a kitchen table in Tallahassee in 2014, these three friends and colleagues - dedicated to a more just and peaceful world - signed the founding documents for this organization.